There is this phenomenon that occurs very frequently, and which could easily be mistaken to something totally different.
i am talking about Satellite Flares (AKA Iridium Flares). this astronomical phenomenon is attributed to some of the man made space objects including a constellation of more than 65 satellites called Iridium Satellites and the International Space Station (ISS) etc.
when one of these satellites travel on a path viewable by an observer on the Earth, and the observer is in the shadow while the satellite is in the sunlight, the satellite appears to glow like a star or even brighter than a star most of the time.
An Iridium Satellite has two antennas which are about the size of a door and due to its tilted angle the sunlight is reflected to the Earth below on a surface that measures approximately 10km in diameter. and when the observer stands in this region while the satellite passes by, it appears to glow brightly for a few seconds. but in order for it to be visible, the observer must be in the shadow (means after sunset or before sunrise) and the satellite must be in the sunlight. occasionally there are flares bright enough to be seen while the sun is still above the horizon.
Iridium Flares can be as bright as magnitude -9 (the smaller the number, the brighter. for comparison, Venus at its brightest is about magnitude -4.7 and the full moon is about magnitude -12 and the sun magnitude -26, the brightest star in the night sky, Sirius, is -1.47. each number is 2.5 times brighter than the previous number, for example 2 is 2.5 times brighter than 3, and -3 is 2.5 times brighter than -2)
i have seen a flare way before 1997 (the time Iridium Satellites were sent to orbit), and it was almost the size of the full moon when it was brightest and lasted about 30 seconds. now the question is what did i see? i think it would remain a mystery.
To check the timings of Iridium Flares in your area, please go to http://www.heavens-above.com/ and choose your location and click the link for that purpose.
Posted by Ali at 9:16 AM No comments:

I have decided that i will be using Mobile broadband in this summer vacation because DSL is so slow in my island (64kbps).

before coming to Maldives this vacation, i have always heard that Wataniya Broadband is fast in my island. but now they say it has slowed down, due to congestion i think.
Wataniya was the only operator who gives 3G network to my island but now Dhiraagu also has introduced it. so i decided to take a Dhiraagu Mobile Broadband package. (partly because they sell it without their modem, too. because i have a modem which i was using when i was abroad) the largest package was 4GB so i subscribed to it (i don't know why neither of the two operators have not introduced an unlimited plan)

so, when i came home (still in the Capital, Male') i ran a speed test and it showed a good 3 Mbps. since then i have done many tests and the result is always around or below 3Mbps.

i can say i am pretty happy with the result. but lets see how they do in the island. i have a feeling that it is gonna be way down.

EDIT: i am now in my island and it looks like i was wrong. the speed is pretty much same even here, but i guess it is because they have not announced 3G formally yet, and everyone else is using Wataniya so there is no congestion in Dhiraagu network yet. and i have found out that Dhiraagu network is HSPA and Wataniya is HSPDA. that means Dhiraagu is actually better than Wataniya. when i was abroad, i have seen how 3G network developed. first came WCDMA then HSDPA then HSUPA and after that HSPA. so i am pretty happy that i chose Dhiraagu.

here is a test taken in the island.

and i have checked Wataniya too, it goes upto 600 kbits/s not more than that.

Update (July 6, 2010): i have tested Wataniya again today, but with my HSPA modem. and the results are a bit higher than before, still much much lower than Dhiraagu.
here are the results.

i know the dust from the Sahara reach countries in Europe, like Spain, Portugal, France and Italy. but that is pretty close to Africa. i didn't know it can travel all the way to the Caribbean, crossing the Atlantic Ocean. that is 3000 miles.
so i was surprised to see it in the Google Earth's Daily Planet layer today (June 2nd, 2010)

here is a screen shot with the measurement tool showing 3000 miles. (click the images to view large size) 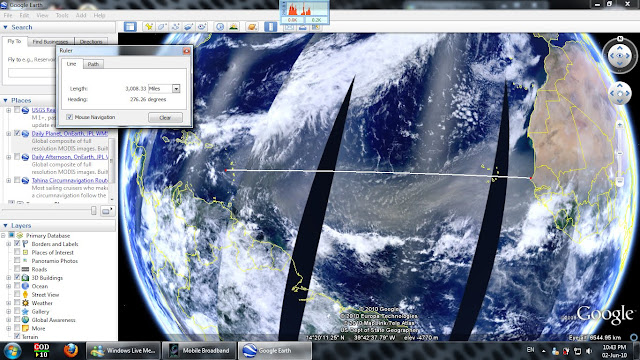 and here is a closer look 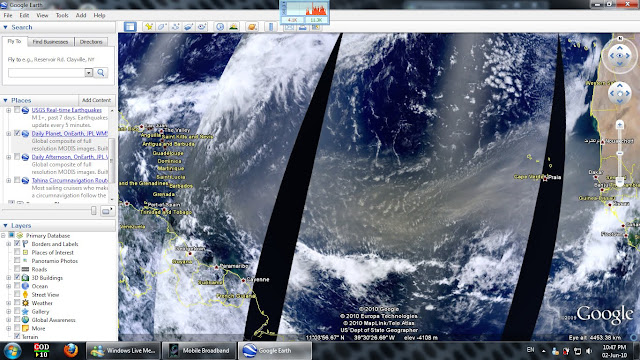 Nature is full of wonders, we can grab this just by looking around, God's creation is awesome. But there are some occasions where we just want to stop and say WOW.

Today i found a picture in one of my contacts stream in Flickr that made me stop and say WOW. This time the Nature showed us how to protect our hearts, in a funny way. 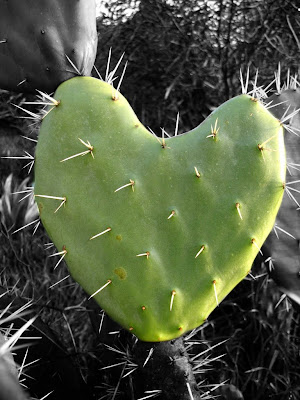 I am a big fan of Google Earth, and i keep both the morning and afternoon daily image layers from NASA MODIS sattelite saved in My Places in Google Earth and occasionally check them.

Yesterday when i activated the layer, i found something interesting. The annular eclipse which occurred over Indian Ocean has made it into the images. so i took two screen shots, one with the morning layer and the other with the afternoon layer. 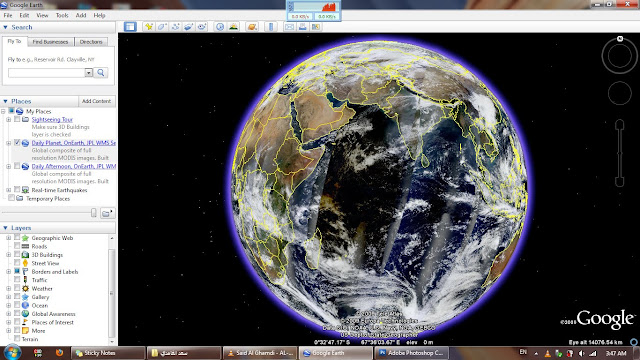 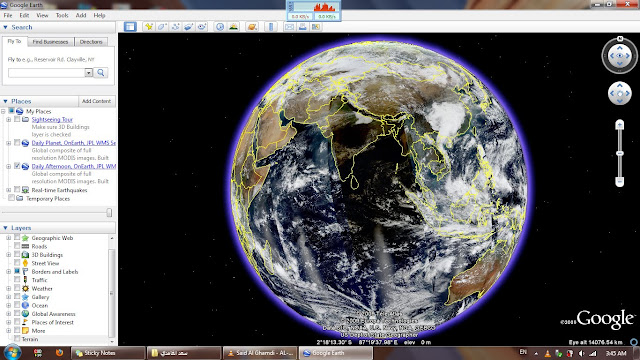 Afternoon Layer
Posted by Ali at 10:48 AM No comments: